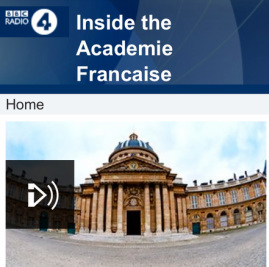 Run by 40 illustrious members known as "Immortals", the Academie is one of France's most hallowed institutions and a symbol "par excellence" of Gallic pride. Its functions include publishing a dictionary sanctioning new words and reminding people of "le bon usage".

In this programme, Agnes Poirier is invited inside the Academie to talk to some of the "Immortals". She has exclusive access to the reception of the latest member, the Belgian writer Francois Weyergans, and observes the Academie's quirky rituals first-hand.

She questions the role and relevance of the body, which has been working on the latest edition of the French dictionary for more than 70 years. She also compares the conservative approach taken in France with the more "laissez-faire" attitude adopted in the Anglophone world towards the English language. Producer: Leala Padmanabhan. Listen to it here. 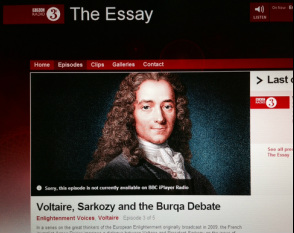 In a series on the great thinkers of the European Enlightenment originally broadcast in 2009, the French journalist Agnes Poirier imagines a dialogue between Voltaire and President Sarkozy on the issue of legislating about the wearing of the burqa in public.

Nicolas Sarkozy is alone at night in the gilded rooms of the Elysee Palace. Carla Bruni is out at a gig with Mick Jagger but the President has something rather more serious on his mind......

In July 2009, the French President Nicolas Sarkozy set up a Parliamentary committee to consider a possible ban in France of the burqa, the full Islamic dress. Agnes Poirier imagines the ruminations of the tired President: what would Voltaire, the father of "laicite" - the uniquely French interpretation of secularism - say on the matter? Would he ban the burqa? Sarkozy drifts off to sleep and finds himself in the oak-panelled library at the Chateau de Ferney, home of Voltaire.

In a witty and thought-provoking tour de force of an Essay, French journalist Agnes Poirier brings Voltaire and his views firmly into the contemporary realm in an examination of one of the most vexed debates in France today.